I made a great steak sauce the other night… one that took my slices of steak from “tasty” to “wow” in such a short amount of time that even I was impressed.  I wanted to come up with something that would bump up the flavor of dinner and, while my non-wine loving guys were unimpressed, I thought it turned out really well.

I heated some olive oil in a saute pan, then added in some thinly sliced onions and let them cook for a good half hour, stirring occasionally.  There’s really no shortcut to caramelizing onions – time and low heat are needed to get that toasty sweet taste from an onion – but it is entirely worth the effort.  I started the sauce as soon as I walked in the door from work and made that the focus of the meal, time-wise.  I still had dinner on the table within 40 minutes, but it was the sauce that needed the brunt of cooking time and attention.  While this is an incredibly easy sauce, it’s not going to be quick. 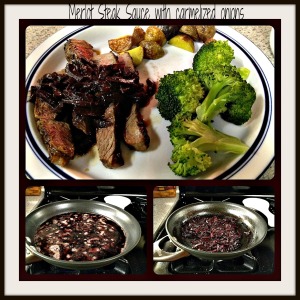 Once the onions hit that “toasty/caramelized” stage, I poured in some Merlot from James River Cellars Winery.  I was using The Force for this recipe, so amounts were going to be approximations no matter how much sauce I was making.  You might be able to tell by the pictures that I only used one onion and about a cup of wine… if you’re making this for a group of wine lovers, I would definitely increase everything for this recipe.

Once the wine was reduced to an acceptable thickness (by about 60% or so), I added a pat of butter to “gloss the sauce”, so to speak.  This bit of fat contributed a shininess to the visual presentation of the sauce on my steak and I later went back and topped some of my roasted potatoes and steamed broccoli with sauce as well.  Since I was the only one sampling, I had enough to spread throughout my dinner and, wow, was it ever tasty.  Whoever said that a sauce for your steak wouldn’t make other foods taste good as well was (IMHO) nuts!

Easy, simple sauce… that’s what I was hoping to create, and that’s what I got.  As I said earlier, it did take time, but the effort was truly minimal for the amount of flavor that I gained.

Feel free to mix up some of the ingredients in this recipe to cater to the favorites in your own family.  You could easily replace the onions with mushrooms… swap out the Merlot for a Cabernet Franc or Cabernet Sauvignon… this is a basic recipe, meant to allow you to tailor flavors to your preferences.

Have fun playing with your food… that’s what makes cooking so enjoyable!

This could get messy.