I truly love having an afternoon when I have time to make a hearty, warming, delicious dinner.  I love to start with a few ingredients and turn them into something that just screams “Fall” to me and my family.  This was just such a meal. I make a lot of cassoulets, but this one turned out really well… so well that I wish I had doubled the recipe so I could have it for another few meals.

Tradition dictates that a “Cassoulet” is a French dish made with meat and beans.  It’s actually named after the slanted-side earthenware bowl (called a Cassole) in which it is to be cooked.  I don’t own such a cooking vessel, so I use a large heavy stockpot that will stand up to some good old-fashioned cooking.  I don’t subscribe to the notion that you have to purchase a ton of different individual utensils to make a good meal.  It’s not necessarily about the final presentation… it’s about the care and love that goes into anything you make.  I realize that this can sound pretty hokey, but it’s honestly how I approach cooking in general.

This recipe was fairly simple and came together extremely well.  I used the following ingredients:  olive oil, one package of boneless, skinless chicken thighs, one thin slice of ham steak (thinly diced),  2 cans of cannellini beans (I used one can of pinto beans and one can of cannellini beans, because that’s what I had on hand), well-chopped Mirepoix (a mixture of carrots, celery, and onion…. don’t let the “big word” bother you), 2 bay leaves, salt/pepper, a can of chicken broth, a can of James River Cellars’ Chardonel, 2 Tablespoons of pumpkin puree, and 1/4 cup of non-fat plain Greek yogurt.

NOTE:  As you may know (if you read this blog at all), I cook using “The Force”.  I look at my fridge and pantry when cooking and adjust my ingredients based on what I have available or what might look good to me at any given moment.  This was one of those recipes.  If you’re starting with a recipe (especially one of *my* recipes), feel free to add or subtract ingredients to tailor the meal to your family’s taste preference or pantry contents. 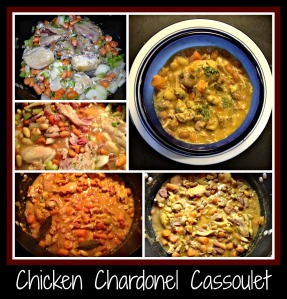 I started with a heavy, rounded stockpot.  I added some olive oil and sauteed the diced ham until it was fairly crispy and the fat had rendered out of the ham.  Using a slotted spoon, I removed the ham and added the mirepoix to saute and soften for a few minutes before popping in the chicken thighs and allowing them to brown a bit.  The meat is going to cook for an hour or two, so don’t worry about whether it’s browned long enough… you simply want the color on the meat before adding in the rest of the ingredients.  Once the chicken and veggies were sauteed (see top left hand photo), I replaced the ham into this mixture and started layering everything into the pot.

The bottom photos show the cassoulet after I added a bit of pumpkin puree.  I realize that this is a strange ingredient to add to a cassoulet, but (as I keep saying) it was in my fridge and I knew that this small amount would thicken the sauce a bit without changing the flavor significantly.  I could have made a roux (butter and flour) and slowly added it to thicken the sauce, but I really felt that would have thickened the cassoulet too much.  It’s really up to you as to how you thicken (or not thicken) your meal… that’s the glory that *is* cooking… make it your own!  My final addition was a huge spoonful (about 1/4 cup) of non-fat plain Greek yogurt.  I could easily have used sour cream, but I try to always have Greek yogurt on hand for just such an occasion.   I absolutely could have left the yogurt out at this point, but adding that light touch really finished the cassoulet and made it special.

That’s a cassoulet, in a nutshell.  Not too hard, right?  This recipe is something that can provide you and your family with a filling, one-pot meal that only needs some crusty bread on the side to complete your dinner.  I hope you’ll try your hand at making this recipe… and making it your own… you may even find a new family favorite!