Have you ever wanted to make dinner but you didn’t actually want to “make dinner”? That was my night tonight.  I had an idea to make a stir fry, using a bag of frozen shrimp that I had thawed during the day, but I had no desire to stand by the stovetop.  Enter the idea of a “roasted stir fry”.  While it was a bit of a gamble, I do think it paid off in the end when we sat down to dinner.  It was yummy!  The best part is that it can qualify as a Starter Recipe because it’s just so darn simple.  Check out the recipe for yourself! 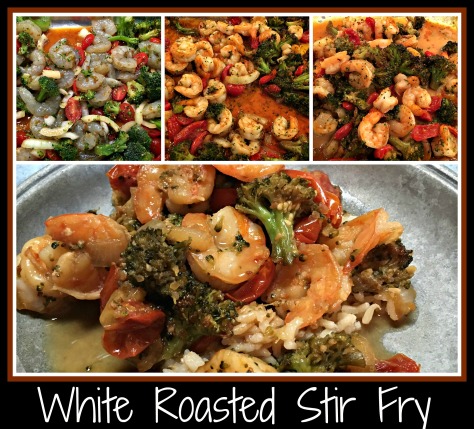 To finish off our dinner, I like to add bread when I make dinner… I typically have sliced bread in the freezer, so I grab a few pieces, spray it with Pam and season with garlic salt. Feel free to play with the ingredients and create something that fits into your family’s favorites… add veggies, serve on noodles, change out some of the sauce flavors… the sky’s the limit when it comes to making dinners that everyone will like!  Enjoy…

I love making casseroles early in the day so that dinner can be a low stress affair.  I do my best to keep the kitchen cleaned up before M comes home (since he’s the one who does the dishes after dinner) so this is the simplest way I know to have time to make that goal a reality.  Casseroles rock… one baking dish to wash after dinner?  Definitely a plus in my book.  Additionally, with the schedules that are kept by all who currently live in our house, I’d have to make four separate servings of a meal to get everyone fed.  With a casserole, I can make it once and everyone can eat when they’re able, though we do endeavor to sit down together to eat as often as possible.

Dinner tonight is one of those “I can’t be there, so dinner is in the fridge” nights.   I’ve got a consult and then a meeting during the time we usually try and have dinner, so  I’ve made a version of Stroganoff that I’m hoping my guys will like.   I used a Reserve Chardonnay and a Pinotage that I had in the fridge to the recipe so the pasta would cook thoroughly and I wouldn’t have to worry about crunchy noodles in my casserole.  It’s done entirely using The Force… and I think it tastes pretty amazing.  Here’s how I made dinner:

Brown 1 sliced (or diced) onion and 1lb of ground turkey in a tiny bit of olive oil in a large saute pan on the stovetop.  Once these are browned nicely, I added a large glug of good Olive Oil and enough flour to make things start to get sticky.  I w

ould start with 2T of flour and see if you need more.  I then added a half box of jumbo elbow macaroni pasta, some garlic paste, salt/pepper, paprika, the rest of a bottle of Reserve Chardonnay (about 3/4 cup?), some glugs of a Pinotage called “Grinder” I have in the fridge (maybe 1/4 cup?) as well as 1 cup of beef stock.  All the liquid is needed to soak into the pasta and get it to cook up nicely without having to pre-cook it.  Here’s what dinner looked like at this point:

It’s still steamy and the noodles haven’t totally cooked, so they still look pretty yellow.  At this point, I put the lid on and let it cook on its own for a bit.  I was editing pictures, so I’m really not sure how long it cooked.  Once I decided the noodles had cooked enough and turned off the heat.

Here’s where the “stroganoff” part came in.  In my head, a stroganoff has to have some sort of creamy sauce and paprika to make it into what I think of as traditional.  I added some Philadelphia creamy garlic sauce (only because I didn’t have any greek yogurt or sour cream on hand) and that seemed to do the trick.  Taste test was a success and I was ready to put dinner in the casserole dish… but it just didn’t look “finished”.  I needed buttered bread crumbs to top it all off.

When growing up, my mom’s Buttered Bread Crumbs were the standard by which I judged all other casserole toppings, which mea

ns that I didn’t like anything that other people called “bread crumbs”.  I now make Buttered Bread Crumbs in the same saute pan I used for the casserole, so I’m including tiny bits of dinner into the delicious topping that will grace this casserole.  Today, I used three burger rolls (because that’s what I had on hand, that’s why) and cut them into small bite-sized pieces.  I heated some of the really good Olive Oil (seen to the right, a fabulous Olive Oil that I got from my cousin Tami and her hubby Harry) with a few tablespoons of margarine and a little garlic paste.  I then tossed in the bread pieces and sauteed this mixture until the bread started to crisp up a bit.  Buttery, garlicky, and toasty… that’s the way these Buttered Bread Crumbs should taste!
Once the topping was finished, I added them onto the casserole and dinner was ready.  M will pop it into the oven tonight and my three guys will have a fabulous home-cooked meal, even though I won’t be there.  It’s one of the joys of working odd hours and being happy to use The Force to create something I am sure they’ll enjoy.  Wine or no, cooking should be about sharing your joy and passion.  I’m just so grateful that my guys appreciate that about me.

Since you won’t be here to see the finished product come out of the oven tonight, here’s a final shot of how dinner looked when I was done playing today.  I may not be the best housekeeper, but I can whip together a great meal and include wine in the process…

This could get messy.