In case I’ve never mentioned this, you should know that I love rotisserie chickens.  I take advantage of any chance I get, to pick one up and throw it into my freezer for use at another time.  It truly calms me to know that I can pull one out to make dinner on any given day.  I’m not sure when that started, but a full freezer and pantry can make me feel ready to tackle any obstacle that life may throw at me.  Maybe that’s why I love heading off to Sam’s Club or the local grocery store… but I digress… I want to share a great, easy recipe for chicken enchiladas that can be made from a rotisserie chicken and some staples from the pantry/fridge.  Doesn’t this look delicious?? 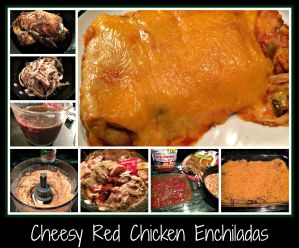 Here are the ingredients:

I pulled one of my frozen chickens out of the fridge and popped it into a large saucepan.  I added about an inch of water and about the same amount of red wine and let the liquid simmer around the chicken (flipping the bird over once or twice) until the meat was warmed and the liquid was nicely seasoned from the chicken.  I then lifted the chicken out of the liquid and allowed it to cool a bit before picking/shredding all the meat off the bones and poured the (now) broth into a measuring up for later use. NOTE: You can also use leftover chicken for this recipe.

I began to make the chicken mixture for inside the enchiladas.  Since I didn’t have a can of refried beans, I popped a can of pinto beans into a small chopper and pulverized the beans until they were *mostly* smooth. Since I had already used the large saucepan to cook the chicken (and so I didn’t have another pan/bowl to wash), I put all the shredded chicken back into the pan. I then added the smashed beans, some salsa, a little of the reserved broth mixture, and seasonings to complete the mixture for inside the enchiladas.

To assemble the dish, I put a bit of salsa and broth mixture on the bottom of a 9×13 baking dish to keep the enchiladas from sticking.  Put a heaping 1/3 cup of the chicken mixture in the center of a flour tortilla, fold the close end over the mixture and pull it back to make a “roll”.  Fold each side in, toward the center, and then roll the enchilada over to enclose the filling.  Place the enchilada, seam-side down, in the coated baking dish and repeat until all the chicken mixture is used and the baking dish is full.  I was able to make a total of 6 enchiladas with this amount of chicken/bean filling, but much will depend on how much you want to put inside each enchilada.  Once all the individual enchiladas are in the baking dish, coat lightly with salsa and sprinkle with lots of cheese (I used an entire bag of shredded cheddar).

You can pop this dish in the freezer at this point if you’d like.  I made this dinner in the morning and my family popped it into the oven so they had a hot dinner while I was at work.  You’ll pop this dish into a preheated 350 degree oven and cook it for 30-40 minutes… cover with foil to bake and remove foil for the last 5 minutes of baking to brown the cheese a bit.

You can serve this dish with a side salad, if you like.  My guys prefer to simply eat the enchiladas by themselves, so they each ate two, while I ate one when I got home.  It was great to have a home-cooked meal after work and I was so glad to have taken the time to put things together.  If you have the time, feel free to make this dinner in two separate dishes and pop one into the freezer for cooking later.  I’ve done this often and it’s a huge help to have a meal available for those days when you don’t feel like cooking or if you want to share a meal with a friend or neighbor.

Remember… I’m never far away if you’re having trouble with one of my recipes.  You can message me on Facebook (From the Bottom of a Wine Bottle) or via Twitter (@alisportshots) and I’ll get back to you asap!  Enjoy!

This is a recipe that I first saw on another blog (kevinandamanda.com) and knew I just HAD to try!  The original recipe called for a lot more cheese and enchilada sauce than I knew my family would like… plus, there was no wine in the recipe.  I just *had* to re-work it into something that would work for me and my wine-inspired blog.  Thankfully, it was a huge hit and has already been made numerous times to great positive acclaim. 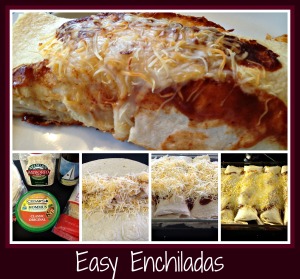 What I love most about this recipe is that it truly is incredibly easy.  I’d always been a bit intimidated by enchiladas for some reason, but not any more when I use this recipe.  Much of this meal was done by simply assembling the ingredients, but first, I had to make some rice.

I used James River Cellars Gewurztraminer wine but could have easily used another favorite wine (Chardonnel, Vidal Blanc, or even Chardonay) to make the rice for this dish.  I used 1 cup of wine, 1 cup of water, and 1 cup of Arborio rice.  I simmered the rice until the liquid was absorbed and the rice was fluffy.  I did add some parsley, salt and pepper, but feel free to add whatever flavors you like in your rice.  Just remember that the rice is a fairly tame part of this assembly line, so don’t go too crazy with the seasonings.

I also decided to use a pre-roasted chicken in this recipe.   I pulled off both chicken breasts and diced the meat small enough to layer in the enchiladas.

Overall, your ingredients are as follows:  tortillas, hummus, rice, chicken, cheese, and enchilada sauce.  As with all my recipes, please feel free to personalize things to your family’s tastes.  Red Pepper Hummus instead of a Garlic Hummus, Mexican cheese in place of Cheddar, Whole Wheat Tortillas as opposed to bulk purchased tortillas or even homemade tortillas. . .  it’s all about making a meal that will make you and your family happy.

Assembling your enchiladas. . . here’s where the fun starts!  Place the tortilla on a cutting board and begin the layering with hummus, a layer of rice (mine is fairly sticky and soft), some chicken, and a sprinkle of cheese.  You can see an example in the second photo from the left… I throw on a fair amount of cheese, but do whatever will make you happy.  I made all the enchiladas, laying them in the baking dish, then poured some enchilada sauce over top and finished by sprinkling on more cheese.  Note:  I loved the Cheesy Enchilada recipe that inspired this alteration but know that my guys would have balked if I had followed her recipe exactly. . .  hence the need for an “Easy Enchilada” recipe of my own.

Once your enchiladas are assembled and ready, you can wait a bit to bake them if you must.  I had a hard time not popping them directly into the oven (I was already hungry by this point) but I was “good” and waited until my darling hubby and son got home from work.  Once they arrived, I popped the baking dish into a 350 degree oven for 30-40 minutes, until the cheese was melty, I could hear sizzling, and there was visible steam rising from the enchiladas.  Seriously. . . I don’t usually use “exact times”, so use your best guess on cooking time, based on your own oven.

As you can see by the large photo of an enchilada, above, these things were really filling.  I thought everyone would end up eating two enchiladas each, but we could barely make it through one.  If you’re making this for a crowd, feel free to expect football players to eat two, but the average person will probably only make it through one.  They are aa-maze-ing!

Hope you find this recipe to be as amazing as we did. . . and, as always, be sure to alter the ingredients to make your own “family favorite”!

This is going to get messy.