Ideas for this sandwich kept popping up in my newsfeed all week, so I thought I would make my own rendition of this delicious recipe that Ree Drummond (The Pioneer Woman) calls The Marlboro Man Sandwich.  It’s a fabulous-looking steak sandwich that isn’t anywhere near as expensive as it *could* be, since it uses cube steak as the main ingredient.   While I would highly recommend checking out the original recipe on The Pioneer Woman site – she’s very entertaining and, IMHO, the sort of personality to which *I* would strive as a cooking show host – this is my own version that recipe but includes WINE (of course) 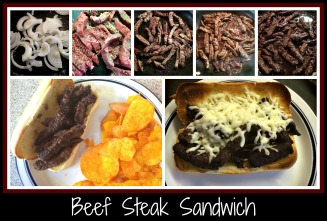 I hope you’ll try your own version of this sandwich sometime.  Add peppers to the onions if you like – that would add some great nutrition to this meal as well as a bit of a fun twist.  I used the last bits of the meat in a salad, so I can safely say that this is a recipe that you can use in most any way you can imagine.  It’d be great in wraps, salads, over noodles, or just as the original sandwich… you just can’t go wrong!

When I was in college, I did an internship at a local “big name” hotel chain, spending a few days in each department and then writing up my findings, coming up with ideas to make things work better (reinventing the wheel, if you will), and generally being “free labor” for whichever manager needed some extra hands.  While I wasn’t wild about some of it when I was there, I realize now that I learned alot of great skills… like cooking!

I spent about a week in the kitchen, helping out with chopping, cooking, breaking eggs, and learning how the chef ran his kitchen.  After a particularly busy morning, he gave me the task of learning how to make his Monte Cristo sandwich, which is kinda like a marriage between french toast and ham & cheese sandwich.  We’re playing with a variation on a theme, after the Croque Monsieur posting yesterday,  but I suddenly had a craving for something like this for my morning meal today.  I didn’t really want to deal with the possible mess of dunking an entire sandwich into an egg batter (I really do not like “ick”), so I went with the alternative plating this sandwich as an open-faced one…  Easy, peasy, right?

I started by making an egg mixture for the “french toast” portion of this sandwich.  In a small mixing bowl, I put some fat free egg substitute, a glug or two of James River Cellars Chardonnay, two thumbs-worth of fat free sour cream, salt, pepper, and paprika.  I added the sour cream because usually there’s an addition of cream to an egg mixture.  It wasn’t going to be the same (hell, I was using wine in something usually reserved for breakfast) but this was my way of coming up with a new and different spin on an old favorite sandwich, like this or this.

Once my egg mixture was done, I took a piece of sourdough bread (remember the bread I used the other day for the Croque Monsieur?  Same stuff… still chewy and yummy.), cut it in half, and soaked the bread before pan frying in on both sides.  I removed it to a baking sheet (covered in foil cuz I hate cleaning those things.. duh!) and popped the deli turkey slices in the pan to brown on each side.  While I was frying the bread, I shredded some sharp cheddar cheese (again, the same cheese from the other day) and doused it with a small amount of the Chardonnay.  When I finished browning the turkey, I laid the turkey on the bread and then thoroughly drained the cheese before topping the sandwich.

While I washed up the dishes, I popped the baking sheet into a 375 degree oven for a few minutes until the cheese melted.  Re-using the saute pan, I fried an egg in a small pat of butter and cooked it quickly, over easy.  I could have used one or two poached eggs instead, but I didn’t want to dirty another pan.  I put the fried egg on top of the cooked sandwich and broke the yolk to simulate the “benedict” taste of this sandwich.
IMHO, the best part of making dinner at home is being able to play with recipes to make them my own.  Have fun!If you’d rather not use the egg, that’s perfectly fine… that’s what so fun about cooking at home and making your own meals.  Add, subtract, play, and enjoy!  I toyed with adding some cooked spinach to this sandwich… I could have swapped out the deli turkey for some deli ham… I could have added some grilled onions or changed the type of cheese.

This is going to get messy.