When my son E was in high school, I would make Pad Thai every few days for his volleyball team.  His friends would drive him home and then back to school again for practice, so I would make homemade meals for them to thank them.  Since I had never included this recipe on my blog, I thought I would post it now. 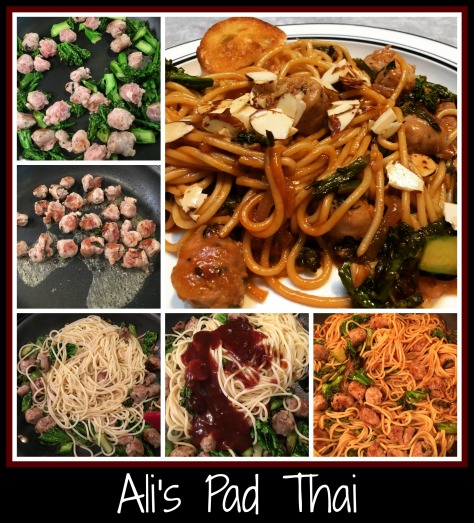 This post is my own interpretation of a favorite Weight Watchers’ recipe that I used years ago.  That recipe used shredded chicken and had a few other tweaks, like using rice noodles and peanuts.

Suffice it to say that I love to play with recipes to create new versions that use wine and work with ingredients or flavors that are favorites of my family members.  I hope you enjoy coming up with new ways to change recipes of your own!

I love using my crock pot.  Having a slow cooker can help you make a lovely, healthy meal any night of the week.  All it takes is a little thought beforehand and a few minutes in the morning before you leave the house (or start working from home).  This was a recipe that I thought looked particularly yummy, but the ingredients needed to be changed out before I could make it for my family.  I know that they balk at large pieces of mushroom or the texture of artichoke hearts, so I did some substituting and came up with a version that worked well for me.

Since I started with an actual recipe (thanks to Weight Watchers for the inspiration) so the ingredients are much more accurate that I typically offer on my blog.  I used “The Force” for this recipe, but vaulted from the actual recipe, so I’ll be kind today and share it with you that way. 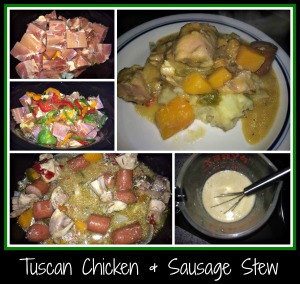 In true “not originally mine” style, here are the steps to follow when you make this recipe, using the ingredients I’ve used in my own swap.

I’ve been trying to be better about using a “recipe builder” application (for my iPad) so that I know the actual nutrition analysis of my recipes.  I got a FitBit Flex from my husband for Christmas this year, so I’m coupling that with the (free) MyFitnessPal app to get a better handle on my own health.  To that end, I’m working to make better choices with regards to the foods that I make.  This stew actually makes six servings, with the following nutritional information:  Calories 302, Total Fat 14g, Saturated 3.9g, Polyunsat.  2.9g, Monounsat. 5.4g, Cholesterol 80mg, Sodium 903mg, Total Carbs 16g, Dietary Fiber 2.5g, Sugar 2.8g, Protein 25g, Vitamin A 129mcg, Vitamin C 20mg, Calcium 51mg, and Iron 3.3mg.

I hope you’ll consider playing around with this recipe.  I really loved it, and had it for the next few meals before it was gone.  At only 302 calories, it seemed reasonable and tasty at the same time.  Enjoy!

I absolutely love making stuffing.  I don’t make it only for Thanksgiving and Christmas, but those are the two times when I make a massive amount and want to use it in sandwiches and leftover meals for a few days.  It’s just so incredibly tasty!

I start making the ingredients for my stuffing a day or so before I actually put everything together for the meal.  It’s easier to cook the sausage a few days in advance and, since I bake the stuffing bread (see previous post) for most of my stuffing, that *has* to be done earlier.

I start two or three days ahead and bake a loaf of bread, then cube it and allow it to dry on a tray.  NOTE: Make sure to let your family know that you’re starting your holiday meal prep or your drying bread may get a little toastier than you expected.  The sausage can be cooked two to three days ahead and kept in the fridge – I like to rinse the sausage once it’s cooked to remove an excess fat, but that’s simply because the cooled fat grosses me out.

Here’s the basic recipe for my Sausage and Apple Stuffing: 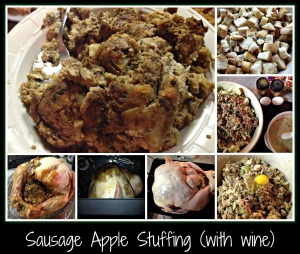 Enjoy!  This should be a great addition to your holiday meal…

I have to start this recipe by saying that I love breakfast foods.  Eggs Benedict… pancakes… french toast… hash browns… sausage… waffles… bacon… you get the picture.  I could have breakfast-for-dinner at least once a week (although my husband much prefers to limit breakfast foods to “breakfast/brunch time”).  Because of this love affair I have with breakfast, I enjoy creating different sorts of recipes that showcase some of my favorite options, especially when I can incorporate wine into the mix.  The best of both worlds, right?

This recipe was created for my dear friend, Stephanie, who’s having a difficult time eating full-size servings of food these days.  To tempt her into eating breakfast one day, I came up with the idea of having small crouton-size bites of french toast that she could eat with her fingers or dip into a fruity sauce.  It was a big success, so I thought I would share this special recipe with everyone here.  I’ve named this recipe in her honor because without her, I wouldn’t have thought to make this delicious breakfast dish in such a unique manner.

I started by cutting up a few slices of whole wheat bread into bite-sized cubes.  Using my memory, I blended an egg (you can absolutely use egg substitute if you prefer), some milk (I like using almond milk if that’s on hand), some white wine (I used Vidal Blanc last time but use whatever you may have in your fridge… just decrease the amount of sugar if you’re using a sweeter wine), a sprinkling of sugar (as desired), a touch of vanilla, and a dash of cinnamon (to taste).  Using a wire whisk, beat the egg mixture until it’s just becoming frothy.  I wanted something that would taste light, so I opted to whip the mixture until it was light and airy.  I then tossed the bread cubes in the egg mixture until all the cubes were soaked with the egg-y-yumminess.  When you’re ready to cook the toast bites, melt a pat of butter (and a touch of olive oil if you’d like) and transferred the toast bites to a very warm saute pan to cook.  Note: don’t crowd the pan, so feel free to do this in two sections if necessary. 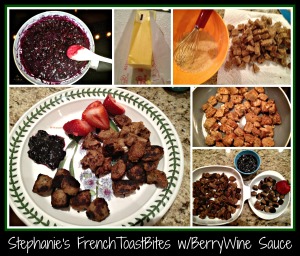 In the meantime, using a small saute pan (or sauce pan), melt a pat of butter and add a handful of blueberries,  Feel free to use whatever berries you have on hand or prefer.  We had quarts of blueberries in the fridge, so they were the natural choice when I was creating the sauce to go along with these toast bites.  As the berries begin to warm and pop open, add some red wine (I went around the pan twice with a lovely Pinot Noir… again, because that’s what was in the fridge.  If I’d had a different red wine available, I might have changed to that one instead.  Use what you have and what you enjoy!) sprinkle some sugar to sweeten the sauce, and I decided to add a dash of cinnamon, to mirror the taste from the french toast bites themselves.  Allow the sauce to cook until it reduces and thickens.  If it gets too thick, add a little more wine… if it’s not thick enough, feel free to add a little more sugar.  This is a Use The Force sort of recipe… make it your own!

You’ll notice that there are also some bites of sausage on the serving plate in the photo – we had turkey sausage that needed to be used (and it was a good source of protein), so I browned the sausage until it was crispy and delicious.  It’s not a prerequisite… just another flavor to temp my dear friend into eating more than she had planned.

Sometimes, you’ll find that you need to expand your horizons when it comes to feeding your loved ones.  If someone isn’t feeling particularly well, feel free to play with your recipe to tempt them into eating something tasty and good for them.  It’s not about who’s doing the cooking or even about how they’re cooking… it’s about the love that is conveyed by the simple act of feeding people.

As you cook, may you enjoy the challenge and turn it into an expression of love.  That’s what it’s all about…